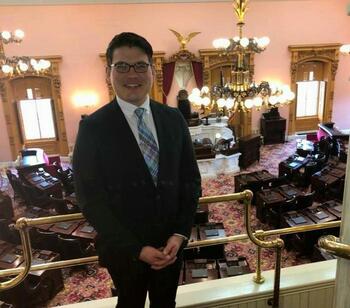 E. Scott Wong, PhD, a fourth-year medical student at Ohio University Heritage College of Osteopathic Medicine-Athens, started a two-week rotation at the OOA office this week. He has already met with a member of the Ohio House of Representatives, attended a Senate Committee hearing, and reviewed current health care legislation. Next week, he will devote time to scheduling meetings with additional representatives of his district and other legislators who impact health care policy.

Wong is not new to the OOA. In 2017-2018 he served on the OOA Board of Trustees and in the OOA and AOA House of Delegates in his position as OU-HCOM Student Government Association president. During that time he was actively involved in writing policy resolutions, four of which became national policy for osteopathic physicians.

He is originally from Cincinnati, was based in Cleveland during his third and fourth years of medical school, and now resides in Columbus.

Wong will give the student commencement speech at the Class of 2020 graduation in May.

The OOA health policy rotation is a 2-4 week elective that introduces students to the state legislative process and public health policy formation.