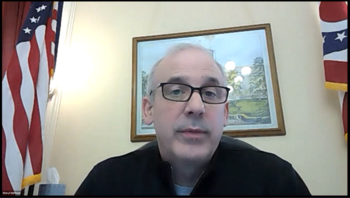 Senate President Matt Huffman (R-Lima) was a guest speaker at the OOA Board of Trustees meeting, February 20. As Senate President, he is responsible for leading the Chamber and setting the policy agenda. Huffman, an attorney from Lima, began his legislative service in 2007. He kicked off his comments by mentioning his support for a bill, the Health Care Simplification Act, from very early in his legislative tenure.  A primary focus of that bill was transparency and the notion that money paid by patients and the government should go to those providing the service.

He gave an update on his legislative priorities for the two-year General Assembly. He noted the state budget process is underway and subcommittee meetings are occurring regularly. Regarding health care, he expressed interest in expanding the ability of doctors to provide telehealth services. He also mentioned the possible reform of facility fees. Additionally, he mentioned the need for some legislative oversight related to emergency and health orders, such as SB 22. He also underscored the importance of associations and individuals to continually engage policymakers throughout the legislative process.