(2012) The Ohio Department of Health has created a Concussions in Youth Sports website with online training programs, information sheets, and other educational resources as a result of  legislation passed by the Ohio General Assembly in December.

The web site contains valuable resources for players, parents, coaches, referees, and physicians.  In addition to  materials specifically required by the new law, the site also contains a list of frequently asked questions, fact sheets for coaches and parents, and CDC diagnosis and management educational articles for physicians.

“The OOA was a strong proponent of HB 143 which will be critical to preventing traumatic brain injury in our young athletes,” said OOA President John F. Ramey, DO. “Each year more than 3,000 students are treated in the state’s emergency departments for head injuries sustained on the playing field.”

Since many DOs serve as team physicians, Ramey urged all OOA members to become familiar with the law, help educate players, parents and coaches, and to update their skills for the emergency management of concussions and head injuries.  He said the Ohio Osteopathic Symposium program in May will include a lecture, entitled, "Friday Night Lights: Managing Concussion On and Off the Field," by Jason Dapore, DO, Columbus, who is the physician member of the Ohio Occupational Therapy, Physical Therapy, and Athletic Trainers Board. 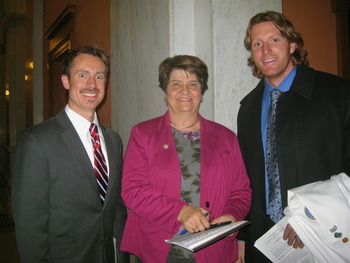 According to Simon Fraser, a second year medical student at the Ohio University Heritage College of Osteopathic Medicine, having the proper people in place to manage concussions on the sidelines is critical. Fraser, who testified as a proponent of the bill on behalf of the OOA was a three-time scholar athlete and star on the 2002 National Championship Ohio State Buckeye football team.  He also played professional football for the Cleveland Browns and the Atlanta Falcons before becoming an osteopathic medical student.

“Many athletes live by the creed ‘If I can walk, I can play,’ and choose to tough out concussions to play.” said Fraser during his testimony before the Senate Health Committee, November 28.  “Specifically I can remember playing in Cleveland and getting my “bell rung” on a kickoff return play. I came to the sideline, gathered myself and returned to the field a couple of plays later thinking nothing of the hit to the head I had just endured because I felt fine and was determined to get back out there.

“Now that I am in medical school I am learning and understanding more about how the anatomy and physiology of concussions interplay with one another.   More than ever I believe that education and having the proper people in place to manage concussions is paramount,” he continued.