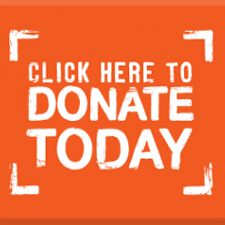 The Ohio Osteopathic Foundation (OOF) is the charitable arm of the Ohio Osteopathic Association (OOA), founded in 1963 to support osteopathic education and research in the state of Ohio. From June 1975 until April 1983, the OOF was funded by a mandatory assessment, unanimously approved by the OOA House of Delegates. The assessment was restricted to support the Ohio University Heritage College of Osteopathic Medicine (OU-HCOM) and raised more than $1 million to support development of the college. Today, the OOF depends on tax-deductible contributions and grants from other foundations and governmental agencies to carry on its work.

The OOF is a 501(c)(3) tax-exempt scientific and educational organization. Individuals may make tax-deductible contributions to support the foundation programs, leave money to the OOF in their wills, or designate the OOF to receive memorial gifts in honor of loved ones. Donations may be restricted according to the donor's specification for specific OOF Programs. The tax-deductible donation is acknowledged by the Foundation.

Inspired by his passion for rowing, OOA Past President Robert W. Hostoffer, Jr., DO,  adopted “PULL” as the theme for his 2015-2016 term. The acronym stands for Pride, Unity, Loyalty, Legacy. Hostoffer captains a four-man boat and has won gold and silver medals in several regattas in the Cleveland area. Get details about the PULL Campaign. Read more about Dr. Hostoffer.

OOA members and friends are invited to make a contribution in honor of a deceased physician. For memorial gifts, a card is sent to the family of the deceased informing them of the donation in honor of their loved one. No amounts are mentioned and your contribution is tax deductible. All donations are acknowledged in Buckeye Osteopathic Physician, unless anonymity is requested.

See the In Memoriam archive. Readers can notify the OOA of a deceased colleague by sending an email to jbarnhart@OhioDO.org. 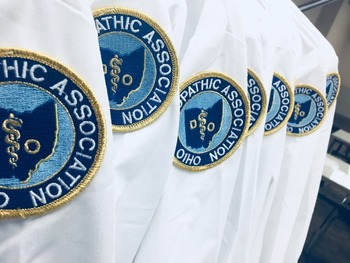 The physician’s white coat is a symbol of authority and professionalism.

A new program, initiated in 2019, helps OOF donors connect with the newest members of the Ohio osteopathic family by purchasing a white coat for an incoming student!

All first-year medical students at Ohio University Heritage College of Osteopathic Medicine (OU-HCOM) receive their first white coat, complete with OOA armpatch, compliments of the Ohio Osteopathic Foundation. It is a gift from their professional family to commemorate the beginning of their academic career as a medical student.

With the sponsorship comes the opportunity to include a message to the recipient, which will be tucked inside the coat pocket. Students receive their coat every year at the Convocation & White Coat Ceremony.

White coat sponsorship is $45 per coat. (Note: When contributing online, include your message in the “comments” field.)

The Ohio Osteopathic Association celebrated its 110th anniversary on December 31, 2008. To mark the occasion, a new walkway with engraved bricks was installed at the OOA headquarters in Columbus.

Barbara A. Bennett, DO, then OOA president, noted the project is a way to pay tribute to a colleague, friend, mentor, or someone who has made a significant contribution to osteopathic medicine. "By purchasing a brick, you will not only mark a place in history, but help pave the way for our dynamic future and leave a lasting legacy," she said. "Particularly since proceeds from the walkway will support osteopathic research and education in Ohio."

Engraved bricks are suitable as birthday, anniversary, and graduation gifts. But can also serve to memorialize the departed.

Personalized bricks may be purchased for $125 each (an optional fourth line may be engraved for an additional $25 per brick), with payment made to the Ohio Osteopathic Foundation. Donations are tax deductible and all proceeds will support osteopathic research and education in Ohio.

Download the Engraved Brick Form for the OOA Commemorative Walkway and return it to the OOA with payment. 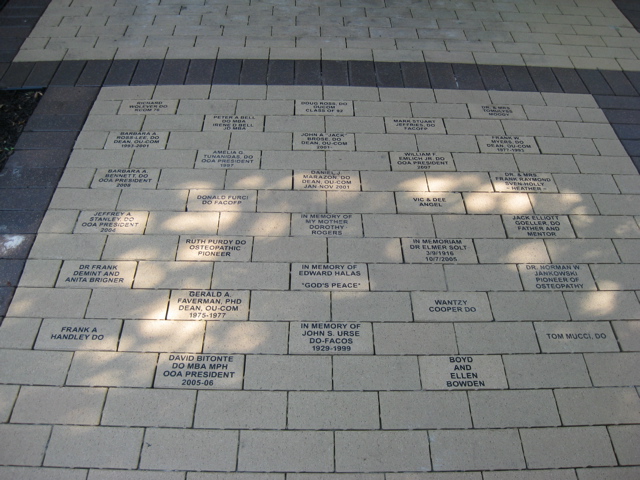 The OOF Student Loan Fund was established in 1982 to provide assistance to Ohio students enrolled in osteopathic colleges. Since its inception, the OOF has provided more than $471,201 in direct loans to osteopathic students. In September 1987, the OOF donated a $28,600 matching grant to OU-HCOM, which generated $260,000 in federal funds through the Health Professions Student Loan Program. In 2004-05, the OOF conducted a matching grant campaign and contributed $205,920 to OU-HCOM to secure $2.6 million from the federal government for primary care and disadvantaged student loans.

Simple interest rates for OOF loans are two percent below prime at the time the loan is approved. To be eligible for the loan, the applicant must be a student at an accredited osteopathic college, a resident of Ohio, have financial need and maintain a passing grade point average. First priority is given to seniors or those in emergency situations, but applications are accepted from all classes based on need. The Nelson J. Musson, DO, Loan Program gives first preferences to students from Northwest Ohio.

OOF loans pay tuition up to a maximum of $6,000 via checks made payable to the student and the osteopathic college. The loan is interest-free during in-school period, and, unless a waiver is requested, requires monthly payments of interest only during the internship and full payment after internship with a maximum repayment period of five years.

The student may apply anytime throughout the school year.

The first OOF Student Scholarships were awarded in 1975 through 1977 to four students in each of the inaugural classes at the Ohio University College of Osteopathic Medicine and were renewable for four years as long as the students maintained academic excellence. The OOF Scholarship Program culminated in 1977 with the permanent endowment of three named scholarship funds, providing annual awards to three students.

Two of the scholarships honor legislators who were instrumental in establishing the Ohio college, including former state representative Tom Fries, of Dayton, the primary sponsor of the legislation that created the school, and George D. Tablack, of Campbell, who was instrumental in funding the school's development. The third scholarship was made possible by a gift from Dr. and Mrs. William J. Athens, of Columbus, in memory of their daughter Angela Sophia. OU-HCOM students should contact the Office of Student Affairs.

that benefit the osteopathic profession. This fund is currently being used to purchase lab coats with OOA arm patches that are presented to OU-HCOM freshmen during the annual convocation and White Coat Ceremony. The fund also supports student activities and programs that enhance osteopathic education in Ohio.

The OOF has donated more than $1 million over the years to fund projects at the Ohio University Heritage College of Osteopathic Medicine. Previous grants funded the purchase of various microscope systems, the learning resource center, basic science instructional units, research equipment, major library acquisitions, a fellowship in osteopathic practice and principles and many other programs. The General Fund also supported a retreat that led to the development of a standard Osteopathic Manipulative Medicine (OMM) curriculum for students associated with the Centers for Osteopathic Research & Education, interns and residents. The OOF also supported the naming of two research labs at the Ohio University Academic Research Center -- one in honor of members of the Ohio Osteopathic Association and the other in honor of Warren General Hospital.

The OOF is an approved sponsor of Category 1-A programs in Ohio. The foundation also serves as an umbrella for districts and affiliated organizations, which can sign agreements to become AOA CME Category 1-A "providers" under the OOF's supervision. See the AOA CME page for complete details.

This fund was established to support the Ohio Physicians Health Program which assists with the identification, intervention and referral, and case management of physicians who are affected by substance use disorders. OPEP assists with recovery documentation, monitoring, education, support, and advocacy.

This fund is utilized to send students and physicians to leadership training programs in Ohio and to support student participation in osteopathic conferences, including the OOA Convention. In 2006, the Osteopathic Heritage Foundations awarded the OOF a five-year, $261,100 grant to work collaboratively with other supportive osteopathic organizations in Ohio in the development of a leadership and mentoring program.

The OOF established a grant program to defray the costs of OOA members who are accepted into the AACOM Health Policy Fellowship Program. Terms of the OOF grant require the recipient to serve on the OOA State Health Policy Committee and to assist association staff in developing position statements on various health policy issues. Contact OOA Executive Director Matt Harney for information.

In January 1997, the OOF established a centennial fund to raise money for special projects designed to honor the 100th anniversary of the profession in Ohio. Commemorative posters, a video profiling the profession in Ohio, and radio public service announcements were produced. In 1999,the fund received a $45,000 grant from The Brentwood Foundation to hire Carol Poh Miller, a Cleveland historian, to research and write a history of the osteopathic profession in Ohio. The book was published by the Ohio University Press in 2004. A Second Voice: A Century of Osteopathic Medicine in Ohio is available for purchase from the Ohio University Press.

Three members of the Warren General Hospital Board were named to a committee to advise the OOF regarding use of the funds. They are Charles H. Curtiss, DO, of Warren; Sandra W. Foster, PhD, of Cortland; and Harold O. Firster, DPM, of Newton Falls. "The contribution was made in honor of all of the physicians and staff who worked at the hospital," said David J. Jenkins, chair of the Warren General Hospital Association.

Opened in 1958, Warren General Hospital was the project of three area osteopathic physicians: William J. Timmins, Jr., DO; Eugene R. DeLucia, DO; and Mario D. Massullo, DO. It operated until 1996 when St. Joseph Health Center, part of Humility of Mary Health Partners, acquired it. The initial endowment comes from proceeds of the sale.